At least three to four times a week, we have the honour (yes, that's the Canadian spelling), of creating Canadian passport photos for our Canadian neighbors living in the Tampa / St Pete area.

Many of them, are referred to us by the local drug stores and AAA offices who only create US sized passport photos (2x2 inch). Canada requires a much larger image (2x2.75 inch). And as with most of the rest of the planet, it's actually measured in millimeters (50x70mm), which means it has to be very precise.

If you're in the central Florida area and needing to update your Canadian Passport, Citizenship, Visa, or Immigration photos, give us a call at 813-968-2810. Newsome's Studio is now located at 10012 N. Dale Mabry Hwy, Suite 219, Tampa, in the Cypress Point Office Park (behind Starbucks at the corner of Linebaugh and N. Dale Mabry Hwy). 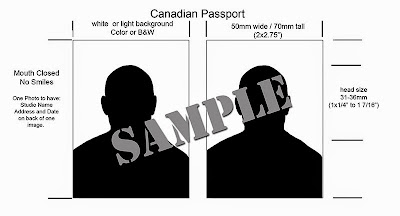 Posted by Kevin Newsome at 6:41 AM