For the first time in over 30 years, I had a US Passport photo rejected. REJECTED! If DRUG STORE photos can pass, why can't WE?

Well, turns out, it wasn't the US Passport Office that rejected it, it was a postal worker at the post office. Seems she interprets the rules differently than the US Passport Office, and when she saw the image being submitted, claimed it wasn't going to pass and insisted on taking a new one (which, of course, she charged them for).

She rejected it on the grounds that the child's HAIR exceeded beyond the top of the photo. Why yes, yes it did... because the child's HAIRDO was piled extraordinarily HIGH... like, almost a foot higher than his SKULL!

The standard by which every country on the planet (including the US) adheres to, is that the "HEAD" size fit within a stated set of parameters. In the US case, it's 1"-1 3/8" from chin to top of the head. In her estimation, that included the hair, regardless of whether or not the hair came straight off a Parisian Fashion Runway, or the set of Hunger Games.

Now, imagine if you will, Marge Simpson coming in for a passport photo. If I applied the Post Office clerk's understanding of the rules to Marge's passport photo, her face would only be about 1/4" big, not nearly enough to discern what she looks like, and her eye height would not meet the required position in the photo.

I dunno, but after going down to the Post Office and having a personal conversation with the postal clerk who rejected the image, I'm of the belief that she is going to CAUSE more rejections from up the chain of command at the actual Passport Office, because if Marge Simpson submits the image on the right, it'll get kicked back faster than Homer can eat a bacon doughnut. 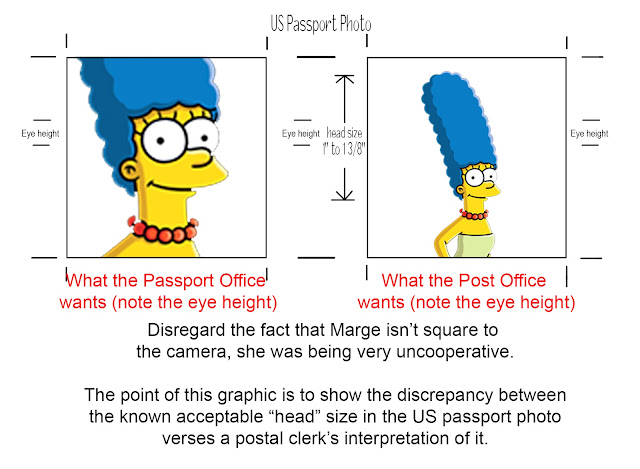 Posted by Kevin Newsome at 10:48 AM No comments: